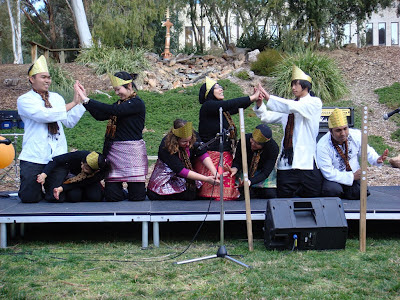 Their costumes sparkled in the sunlight. They wore gold-colored hats that were very bright under the sun. The sarongs worn by the women featured rich colors including red, green, yellow, pink, brown and orange.
The students performed impressively. They successfully captured the spirit of the Likok Pulo dance, with its rhythms and dynamic motion.

Open Day is an event in Australia held every Aug. 25 to promote schools and universities as well as other institutions.

Likok Pulo, in the Acehnese tradition, begins with greetings, as it is a dance to welcome guests -- a symbol of respect and apologies if something unpleasant has happened. The motion, on the other hand, depicts the dynamic of life. Even for Aceh people, all dances, including Likok Pulo, are dedicated to Prophet Muhammad.

UCISS as part of PPIA-UC (Indonesia Australia Student Association University of Canberra) not only presents dance, but also has an Indonesia stall.Information about Indonesia is contained in pamphlets, posters, booklets and many other items. In order to attract visitors, UCISS also provide traditional Indonesian food such as rissoles, jenang (porridge) and wajik (sweet steamed rice) at stalls. For Indonesians, the stall will remedy their longing for Indonesian food while for others it is an opportunity to taste appetizing Indonesian cakes.

Something that make the UCISS stall unique is that they produce rissoles live on stage. The team brought kitchen equipment to demonstrate the entire cooking method for rissoles. In less than two hours the special food from Indonesia was sold out.

At 1.45 p.m. UCISS performed the Likok Pulo dance again. The second performance was in order to join in the Master Talent Contest. The contest was open to anyone -- individuals or groups -- to demonstrate their talent. The contest is an additional program at every Open Day event. The winners will be divided into several categories; most courageous, humongous (enormous), humorous and glamorous. The UCISS dancers team was most glamorous. UCISS president Sadewa Herwindu told The Jakarta Post Indonesian students continuously promote Indonesian culture in Australia.

UCISS, founded in March 2001, brings Indonesian UC students together. Its main purpose is to expand networking between UCISS and UC through education, social and cultural programs. This year UCISS launched Forum Indonesia as a monthly discussion program. Internally, the objective of the program is to enhance students' understanding of Indonesia problems. Beside, it is aimed at strengthening students' presentation ability in English. The program also strengthens the Indonesia-Australia relationship. Since its launch, Forum Indonesia has held two events. The first took the topic of climate change and Indonesia's forests; the second was on the general election and challenge for policy-making in Aceh.
http://www.thejakartapost.com/news/2006/05/28/riaustralian-ties-expands-through-literature.html