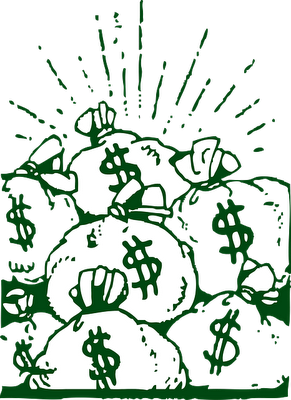 All the customers standing in line for the bank teller shouted when a young man pushed in at the front of the queue.
He was wearing a blue shirt, black trousers, red tie and a black blazer and ignored others who had been patiently waiting in the long queue.
Both tellers, on the other hand, welcomed him and smiled at him sweetly. One must have said to him: "Good afternoon, Sir! What can I do for you?" He whispered something to her and she just kept nodding.
He put his bag on the counter in front of the teller.
In the meantime, a number of customers who had been standing in line for what seemed like hours got annoyed when the teller served him.
"Damn! He must be a rich man!"
"He can't do that, though!"
"I think he might be a bureaucrat!"
"Whoever he is, he must join the queue for bank service!"
"You're right! He shouldn't jump the queue!"
*****
It was 6.30 a.m. when I had left home. I had hoped I could avoid a long queue if I arrived early. Besides, it took about an hour to get to the bank on Jl. Diponegoro, Salatiga.
However, many customers had had the same idea; that was why there was already a long queue by 7.45 a.m. outside the bank, which would be open at 8 am.
It was to be expected as this was the last day of business before a long break. Banks would be closed for a week due to the Lebaran holiday; hence, customers had to anticipate what they might need during that time.
As a result they waited patiently in line, even though it seemed to take hours. There was no other choice. Leaving the queue would only bring other problems.
My wife, for instance, would be waiting for me at home and she would ask many questions. "How much cash did you get, honey? Is it enough to cover our expenses during Lebaran and a week after?"
"We're also going to go to visit our parents, you have taken that into account, haven't you?"
Knowing that I had withdrawn money, my children, of course, would say, "I want a new shirt!" Then, my second child would say, "I need new shoes, Dad!"
All this came to mind as I stood a long way back in the queue. Basically, if all customers had followed the bank's advice they would not have needed to be stuck in a long queue every year as Lebaran approached.
The bank had advised customers to get an automatic teller machine (ATM) card. They had even offered them one. With such a card customers could avoid queues.
Administration costs however, had alienated customers, especially those on a low salary. They seemed to prefer to stand in endless queues.
They didn't want to waste hard-earned money on bank charges.
*****
The tellers, both young women, were busy with the young man who seemed to be withdrawing a huge amount of money. One of them had to take boxes of money from other tellers. They both looked exhausted.
The appearance of the teller infuriated me. I felt tellers should not show any nervous tension when serving customers. They had been trained, as tellers, to perform their job in a cheerful manner, hadn't they?
Meanwhile, the young man stood at the counter. He sometimes looked impatient. He leaned over toward the window several times.
"Damn! A rich man with a bad temper! Look at him! Even though the tellers have given him top priority he is still displeased!"
"Probably, he is a rich man or a bureaucrat!"
"He has no sense of courtesy!"
"He's too rude!"
"He's putting both tellers under pressure, that is why they look awkward."
The customers stood in the long queue and didn't stop grumbling. Initially, they grumbled because the tellers had let the young man jump the queue.
However, they stopped blaming the tellers when they saw how the young man was harassing them.
I kept silent because this was the fasting month. At such time Muslims should not only fast but also avoid getting angry. I worried it could break my fast. To keep calm I told myself that this was to be expected in a big city.
Not only were the customers grumbling but they begun stamping their feet on the floor making strange noises. The young man ignored them.
Now, one of the tellers was filling the young gentleman's bag with money. The bag was getting fuller all the time.
The tellers had spent about 20 minutes serving the young man. I thought that was an appropriate time, considering he had withdrawn such a lot of money. Usually, each transaction only took five minutes if a customer made a small withdrawal. Most transactions only took five minutes.
After receiving his bag the young gentleman whispered something to the tellers, who just nodded.
Then the young man left hurriedly.
The bank returned to normal. The customers were cooling down.
However, when a customer stepped up to the counter both tellers began to shout, "Oh no, don't come here! That man just left a time bomb. Also, he robbed our bank!
Salatiga, December 2005
http://www.thejakartapost.com/news/2007/01/28/young-man-and-two-tellers.html
at August 15, 2007