Article: Independence Day commemoration: Fun and games for all in Canberra 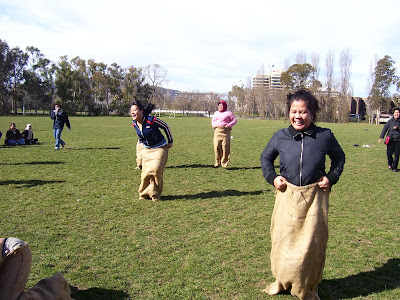 
The Willows Oval at Australian National University (ANU) is still quiet at 9:30 a.m. Only a few people have shown up, although the event should start at 9 a.m., according to the timetable.

It is a lovely sunny morning. The sky is clear and blue. The green of the Willows Oval's grass is quite brilliant in the sunlight. However, the weather is very cold. The temperature is only five degrees Celsius. According to the TV weather forecast, on Sunday, July 29, the temperature was to be from minus one to 12 degrees Celsius. Today will be mostly sunny.

One by one, the Indonesian community in Canberra, children and their parents, dressed in warm jackets and jumpers, have been gathering at the Willows Oval to play Aussie rules football. They have come, not just for the games, but to commemorate an historic Indonesian day even though they have to fight against a freezing morning and wake up earlier than usual for a Sunday. They are paying tribute to Indonesia's 62nd anniversary of independence.

The games committee has set up the event well. A group from the Indonesian Embassy is preparing a barbecue party while a committee drawn from the students arranges the fun games. Nine children stand facing kerupuk (fish crackers) at 10 a.m. They will take part in the race to eat the kerupuk on a string -- in Australia this game is known as eating apples on a string. Two sessions have been arranged for children according to their age. After about two-and-a-half hours all the games for children are finished. The winners of each heat for kerupuk-eating, the egg-and-spoon race, the sack race and the tug-of-war have emerged. The spectators, about 60 adults and children, shout "hip-hip hooray" for the participants, especially the winners.

Before holding the adult games, everyone breaks for lunch at 1 p.m. The smell of beef barbecue and other foods such as fried chicken and pumpkin cake for desert seduce all present. Also, there is Betawi asinan (salad to Indonesia taste from the Betawi in Jakarta). The asinan is very special for the Indonesian community in Canberra as people will not find it at any supermarket: They have to wait for a special occasion or party like today's.

The participants of the games, and also the spectators, have been working up an appetite and thirst. Meanwhile, it's warming up. The temperature is now about 12 degrees Celsius. Everyone enjoys the food and fine weather. The embassy staff have forgotten their routine activities in the office and the students have abandoned their assignments for a moment. They immerse themselves as one in the atmosphere, having great fun in the party.

Every year, the Indonesian Students Association of Australia (PPIA) collaborates with the Indonesian Embassy to organize events to commemorate Independence Day. Besides fun games, the committee also holds sporting events such as badminton, tennis, indoor soccer, volley ball and table-tennis. Like last year, some events have been held several weeks beforehand.

Sporting and fun games are held on the weekend as most of the committee and the participants are students.
After the barbecue, the adult games begin. The games are the same as those for the children. Postgraduate and undergraduate students participate as one: There is no gap between PhD students or undergraduates. They are also from different universities -- ANU and the University of Canberra.

In the kerupuk-eating contest, all participants compete very seriously. The delicacy on offer is Palembang kerupuk, as can be found at Asian stores. In the sack race, another example of a keenly fought competition, the participants fall down all over the place as they attempt to run. Although everyone wants to win, the most important thing is that they have participated in the Independence Day party. 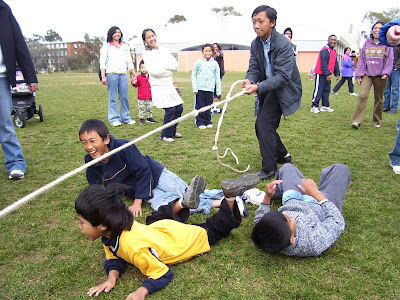 By 3 p.m. it's all over. Everyone shakes hands and expresses their appreciation to the organizing committees.
The games have been a source of joy for everyone. Most important of all, the games have revived everyone's sense of nationalism and brought them all together. (The Jakarta Post, August 12, 2007)
at August 12, 2007