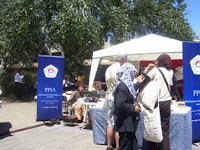 About 18,000 students from Indonesia, most privately funded and partly sponsored, are studying in Australia now -- the second-largest contingent of Indonesian students overseas after those in the U.S.

They are spread wide, all over Australia. They are studying for undergraduate and postgraduate degrees in a variety of subjects.

These lucky youngsters are the face of Indonesia in Australia. They are in effect a microcosm of what Indonesia will be like in the future. Consequently, they occupy a strategic position as unofficial "diplomats".

The Indonesian Students Association of Australia (PPIA) regards the students as having enormous potential for Indonesia. So far, how has PPIA handled this potential?

Although the students are Indonesian, in reality most are not active PPIA members. Therefore, PPIA has tried to encourage them to play a more active role within the organization.

This has been a PPIA objective since it was established in Canberra in 1981. (Previously, the Indonesian Lecturer and Researcher Association of Australia (HPPIA) was founded in 1975.)

If students wish to become PPIA members they have to be registered, said PPIA head Della Temenggung.

Another reality is that not all of the registered members are involved actively in PPIA programs.

There are 26 branch (state-level) and stem (university-level) organizations within PPIA.

PPIA is an independent organization, Della insisted, although some think that PPIA has yet to achieve financial independence.

PPIA celebrates its anniversary every March 8 and has played a significant role in Indonesia-Australia relations.

Examples include members acting as facilitators for meetings of legislators from the two countries. On the diplomatic side, PPIA took on the role of catalyst in discussions on the recent Papua cases. In 2006 Australia gave visas to 42 asylum-seekers from Papua.

For Indonesia the policy had the potential to damage the diplomatic relationship between both countries. PPIA made recommendations for stabilizing Indonesia-Australia relations, and President Susilo Bambang Yudoyodo invited a PPIA delegation to discuss the issue in Jakarta.

The PPIA also holds cultural events. Every August, the month of the Indonesian independence, PPIA holds special events in some states and cities.
Examples include Pesta Rakyat (People's Party) in Sydney, Pesta Kampung (Village Party) in Melbourne and Festival Indonesia in Adelaide.

PPIA has a social program. When the Asian tsunami damaged much of Aceh and Nias in 2004 and an earthquake destroyed Yogyakarta in 2006, PPIA donated funds to survivors. PPIA and Australian Communities collaborated to form Network for Tsunami Aceh (NTA).

In Melbourne, PPIA members performed street music to collect funds, Della explained.
As a student association, of course, PPIA has academic and sports-oriented programs.
This year, Della said, PPIA would hold the International Conference for Indonesian Students (KIPI) in Sydney, in September.

There are several short-term objectives that PPIA intends to achieve from the event.
These are to persuade the government to accept students who possess an undergraduate certificate when they return to Indonesia and apply for a job in the government; also, to make a database of Indonesian experts overseas.

PPIA's future success therefore depends very much on its ability to demonstrate that it can assist students in fulfilling their own potential. (Ahmad Syam, Contributor, Canberra)