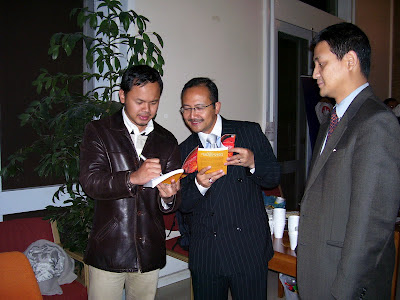 Bima Arya Sugiarto, one of writer, was signing the book (Picture: Ahmad Syam)


On April 27, Cooms Building at The Australian National University (ANU) was, as usual, very quiet. Only one or two people entered or departed, but the Tea Room was something else altogether.

About 40 people, most of them Indonesian students, and several Australians familiar with Indonesian culture and language filled the room.

The vice ambassador of the Indonesian Embassy in Canberra, Kristiarto Legowo, was also in attendance on that wonderful night, when Satu Pertanyaan dari Selatan: Kumpulan Cerpen Berlatar Australia (A question from the south: Short stories set in Australia) was launched.

The audience members looked relax as they kept their attention on speakers who commented on the short story anthology. At times, people laughed freely and students seemed to forget their assignments for a moment. It seemed everyone present also overlooked the disharmony in Indonesian-Australian relations that had resulted from the recent Papua asylum-seeker case. 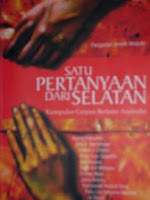 Satu Pertanyaan dari Selatan was finally launched in Canberra after its publication in January. In fact, the anthology had already been launched in Jakarta several months ago.

Della Temenggung, President of Perhimpunan Pelajar Indonesia Australia (PPIA), or the Australia Indonesian Students Association in Canberra, said that the objectives of its fiction publication program was to provide more information about Australia in a literary, instead of academic, style.

According to her, information about Australia could only be found in political or academic books in Indonesia. As a result, only a few Indonesian people could access information on the neighboring country. She continued that more people are interested in gathering information on Australian's economy, society, politics and culture through literature, as people generally prefer reading fiction to scientific books.

The next speaker was Bima Arya Sugiarto, who represented the writers featured in Satu Pertanyaan dari Selatan. Bima illustrated the anthology's comprehensiveness, because it encompassed all sides of Australia: social issues, technology, humanity, humor, even love.

Dr. George Quinn, a professor at ANU, reminded the audience of several prominent Indonesian authors who had lived overseas, such as Budi Dharma and Umar Kayam. Quinn, who was involved in the anthology's publication as a judge, said that Budi Dharma had composed a novel Orang-orang Bloomington (People of Bloomington) after living in Bloomington for years. Meanwhile, Umar Kayam wrote Seribu Kunang-kunang di Mahattan (A thousand fireflies in Manhattan) to share his experience in Mahattan, New York. Quinn hoped Indonesian students in Canberra would follow Budi Dharma's or Umar Kayam's creative processes.

The launch party, on the other hand, was very simple but full of Indonesian nuances, such as rujak, an Indonesian dish made from fruits with a tangy, sweet chili sauce. The program was sponsored by the PPIA and the Australia-Indonesia Institute. (Ahmad Syam, Contributor, Canberra)
http://www.thejakartapost.com/news/2006/05/28/riaustralian-ties-expands-through-literature.html